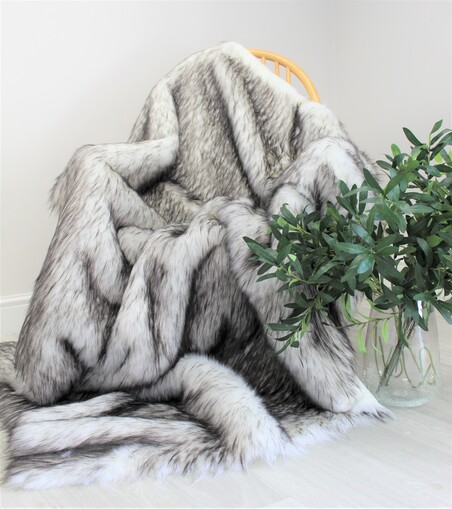 Arctic Fox (part of our Tundra range) With a white base and black tips another sensational faux fur.

This stunning silky fur is a luxurious 5cm (2 inches) with guard hairs up to 8 cm. (over 3 inches).

Manufactured with a very tight knit which makes this a really dense luxurious faux fur.

Did you know? The arctic fox is an incredibly hardy animal that can survive frigid Arctic temperatures in the treeless lands where it makes its home. It has furry soles, short ears, and a short muzzle - all-important adaptations to the chilly climate. Arctic foxes live in burrows, and in a blizzard, they may tunnel into the snow to create shelter.

Arctic foxes have beautiful white coats that act as very effective winter camouflage. The natural hues allow the animal to blend into the tundra's snow and ice. When the seasons change, the fox's coat turns as well, adopting a brown or grey appearance that provides cover among the summer tundra's rocks and plants. Their ability to change colours can be even more advanced studies have shown that arctic foxes living in areas where the snow is not purely white, produce fur of the same, greyish colour as the snow.

The Arctic fox has the warmest pelt of any animal found in the Arctic, enduring temperatures as low as -70 °C. Which sadly means Arctic foxes are hunted mainly for their fur, although it takes as many as 20 foxes to make just one coat.

Thanks to their relatively high reproductive output, the global population of arctic foxes is not endangered yet but several sub-populations are. In all of Norway, Sweden, and Finland, for example, the estimated population of this animal is fewer than 200 individuals.Arctic foxes live in underground dens which can be centuries old, used by numerous generations of foxes. These tunnel systems are often very large, covering as many as 1,000 sq. miles (1,200 sq yd) and having up to 150 entrances.

In the Wild Arctic Foxes are monogamous animals. They mate for life!